You are using an outdated browser. This website may not function correctly. Please upgrade your browser to improve your experience and security.

When Ed O’Donnell, the co-founder of design studio Angel O’Donnell, was tasked with dressing the interiors of Newfoundland little did he know he would find himself among its lucky residents a few months down the line.

Having moved into a one-bed apartment, Ed and his partner got to experience high-rise living at its finest. “Our apartment is river-facing, and you get to see the whole city – who needs TV with views like that”, says Ed.

He had never lived in a skyscraper before, and every morning he wakes up in his apartment, with its incredible views over London, he feels as if he were on holiday in a five-star hotel, except the place has its own personality and oozes style.

Angel O’Donnell has used bold colours, like burnt orange and deep blue in the dressing of some of the apartments to create a sense of warmth and link them with their waterside location.

The couple particularly enjoy the clever design of their home, which is equipped with a sliding wall separating the bed from the living area, and a beautifully crafted revolving TV and book cabinet which rotates to face either the bedroom or living area.

“Had I not worked with Vertus, I don’t think I would have ever considered living in a high-rise building, but after a few weeks at Newfoundland, my perspective has shifted”, he continues.

Residents at Newfoundland also have access to extensive amenities as part of Club Vertus, including a private dining room, which can be booked for small gatherings, and a screening room – perfect for hosting cinema events, as well as a lounge, a games room, a large terrace, BBQ, and two children’s play areas. 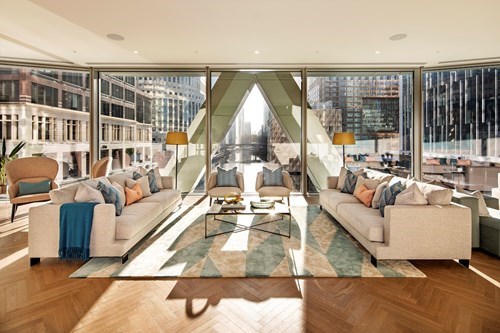 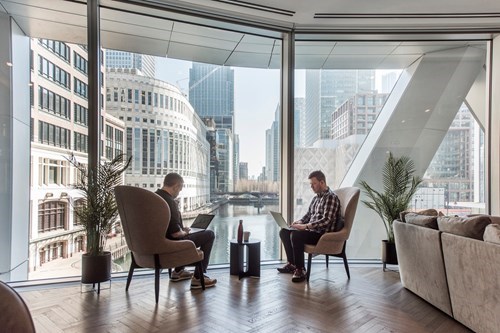 “There is an on-site concierge who is always on-hand, with a smile on their face, ready to help. Everyone we’ve met has been so friendly and accommodating. Whether you’re asking where the nearest ATM is, asking for details about a free meditation class, or you’re being notified by intercom that one’s food delivery has arrived”, Ed adds.

Additionally, residents benefit from a 24/7 gym featuring a range of Technogym equipment and two separate studios for PT training and spin classes, making it easy to lead an active lifestyle. 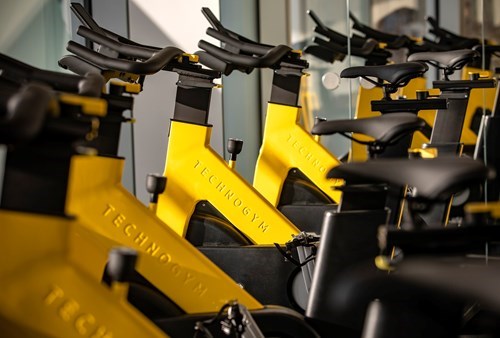 “Having a gym in the building is great. You just roll out of bed, get the lift and you’re there – there is no excuse not to work out, and it’s so easy to fit exercise into your schedule”, Ed went on to say.

There is also a vibrant coworking area, a life-changing feature for busy professionals like Ed.

When he doesn’t work from Newfoundland, Ed catches a Thames Clippers service from Canary Wharf pier, just a few minutes’ walk away, which takes him all the way to Embankment where he uses another coworking space. The journey, which takes 30 minutes door-to-door, is even faster by tube, with the Jubilee line running fast and frequent services, seamlessly connecting east and west London.

“I was really impressed with the convenience of our new location, as well as the quality of bars and restaurants in the area. It’s like living in the West End but surrounded by water. There is a common misconception about Canary Wharf, with many people still seeing it as a purely work-oriented destination, and that couldn’t be further from the truth. It’s a buzzing, beautifully landscaped area with some really, really good restaurants, like Hawksmoor”, he added.

Ed was surprised to discover the large number of people already calling Canary Wharf their home and felt completely at ease as soon as he and JP moved in.

“It’s such a friendly and lively place to be. A lot of thought has gone into placemaking and there is already a strong sense of community – not something I would have believed had I not experienced it first-hand”.

Book a viewing at Newfoundland

We use cookies and third-party scripts to give you the best possible online experience.

I Agree
No Thanks

Our leasing office is closed until 10.30am on the 26th October due to an all team meeting.