You are using an outdated browser. This website may not function correctly. Please upgrade your browser to improve your experience and security.

A COMMITMENT TO SUSTAINABLE DEVELOPMENT

Sustainability is at the core of Canary Wharf Group's commitment – energy-efficient development, decarbonisation, waste reduction, cleaner air and the responsible sourcing of timber and all other major materials. These are the five pillars that have made them responsible for some of the most sustainable development in London.

This is the amount of certified timber from well-managed forests and/or recycled sources that Canary Wharf Group has used. For every tree that is taken from these forests, at least one new tree is grown to ensure that more trees are replaced than harvested. The Group now have 33 FSCTM certified buildings to their name, more than any other developer. 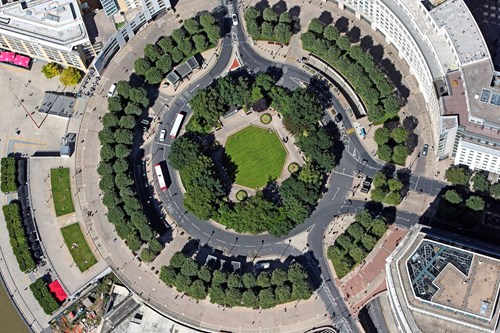 This is the total sum of Canary Wharf Group’s sustainable-certified buildings, including 10 George Street and all other Canary Wharf new developments – more than any other developer in the UK. This includes three office buildings awarded ‘BREEAM Outstanding’, making them best-in-class for health & wellbeing, responsible sourcing and energy efficiency.

HOME TO FIVE SPECIES OF BAT

Five species of bat now call the Estate home, along with bees, seals, fish and birds such as Tufted Ducks, Mallards and Terns. Canary Wharf Group were the first developer to have a biodiversity action plan and have subsequently been awarded Green Flag status.

9 million items of single-use plastic and 6 million coffee cups have been recycled or removed from Canary Wharf. In addition, 590 tonnes of coffee grounds have been diverted from landfill and turned into biofuels. In fact, an incredible 18 tonnes of waste as processed on the Estate every day, more than any other developer.

The Group’s success in removing 180KG of waste from local waterways, coupled with its award-winning ‘breaking the Plastic Habit’ programme, has also seen the Estate awarded ‘Plastic-Free Communities’ status from environmental charity Surfers against Sewage.

Over 16 acres of parks, gardens and squares have been installed and maintained as part of Canary Wharf Group’s commitment to sustainable development in London. From Jubilee Park to Wood Wharf's Harbour Quay Gardens, they provide revitalising spaces that allow residents, workers and visitors alike to reconnect with nature. They’re also vital in supporting increasing levels of biodiversity on the Estate and constant monitoring has also shown that the air here is cleaner than the rest of Central London. 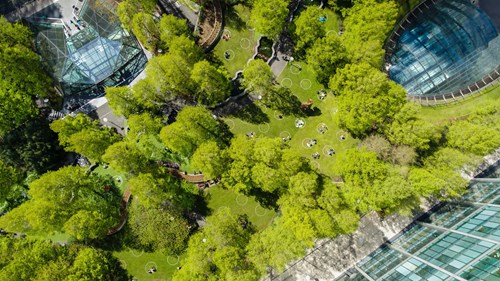 The year by which Canary Wharf Group have pledged to reach net zero carbon, making them the first commercial centre in the world to do so with approved Science Based Targets. 100% of their electricity purchased has come from renewable sources since 2012. They’re also the first in the sector to sign The Climate Pledge, alongside founders Amazon, and other global sustainability leaders such as Microsoft and Unilever.

Register with Vertus today to find out more about how renting in Canary Wharf’s new developments would mean living in one of London’s most sustainable neighbourhoods.

Nurture Nature: Stay Healthy and Happy by making the most of your apartment

SUSTAINABLE DEVELOPMENT - HOW CAN PLACES LIMIT THEIR ENVIRONMENT IMPACT?

We use cookies and third-party scripts to give you the best possible online experience.

I Agree
No Thanks

Our leasing office is closed until 10.30am on the 26th October due to an all team meeting.